From the Pilot’s to the Captain’s Chair

“It’s like Dwarf Fortress, but in space!” was my first thought when Gaines explained the game to me. It turns out that I was mostly wrong. As of yet, Kerbal Space Program (KSP) doesn’t possess the same depth of complexity as Tarn Adams’ mind-boggling game. However, the two games do share something in common: failure is fun.

As Gaines explained in his post, one of the most exciting moments of KSP is the epic failure, and anyone who’s played KSP has had several (ladders, dear gods, ladders). One of my early attempts at playing the game resulted in an orbiting astronaut achieving escape velocity through the medium of simply decoupling his capsule at the wrong place and time (he’s probably somewhere around Eeloo now).

Another such failure involved an attempt at landing a fully-formed roving crane onto the Mün (KSP’s celestial body equivalent to our moon). Landing is a tricky affair in KSP, especially landing non-symmetrical or off-balance objects. My crane’s landing module possessed both of these characteristics. Needless to say, my own meager piloting skills were not up to the task. As I was on my final approach, I failed to completely negate any sideways momentum. As a result, my deceleration boosters hit the ground at an odd angle, broke off, and exploded into a gigantic ball of flame that filled my screen. I didn’t have time to feel sorry for myself because in the next moment, I saw my intact crane come rolling out of the wall of smoke and flame. Victory! But poor Jeremiah Kerman was now trapped on the Mün, a fate not unlike that of Wilsted Kerman.

However, perhaps even more fascinating to me is the subject of mods. Now, mods have been around for a while, and they’ve been responsible for the extended life of particular games. Some have become retail games, others have spawned new game genres, and others are just so whimsical or absurd that they become instant hits. However, most mods are content with slightly transforming a game in some way, either by adding high resolution graphics where there were none, or by making new game elements available.

In KSP, most mods fall in this last category. Because the game is still in the alpha stage of development, its community has been adding elements that it would like to see included in the final release. For example, the crane I mentioned earlier was created using a mod that adds crane parts to the game. There is, however, one mod that is more contentious than most: MechJeb.

Essentially, MechJeb is an autopilot mod. It adds a control module that pilots your rocket for you. Without it, all details of the rocket are controlled manually. Now, this might seem like a small thing, but its use has nonetheless become controversial within the KSP community. A quick search reveals forum thread titles such as “Am I the only one who doesn’t use mechjeb?“, “Is MechJeb really cheating?“, or “Is it ok to use mechjeb?“. Arguments around MechJeb have become so predictable that kerbalspaceprogram.com forum user TMS created an infographic to help navigate the controversy: 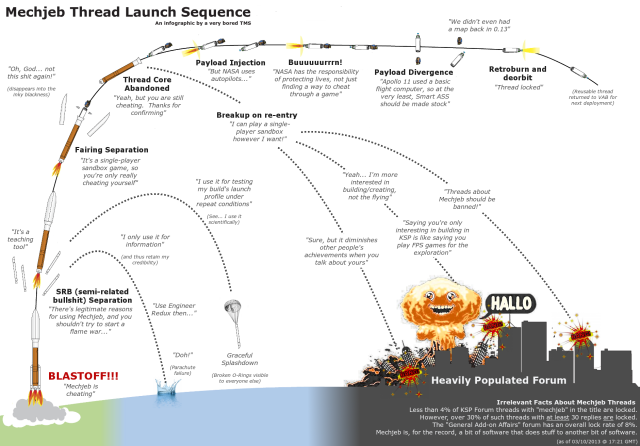 Un-modded, KSP puts players in the role of the ship’s pilot. After the ship is created, players manually control every aspect of the flight, from lighting the main engine, to compensating for ship roll, to deploying the landing parachutes.

MechJeb does all of that for you. In this sense, it takes away a lot of the actions you can do in the game. However, it replaces them with others. Suddenly, I’m not so much adjusting yaw during take-off so much as planning the ideal orbit. I’m not initiating a long burn to change my trajectory so much as planning my ship’s odyssey around the solar system. In effect, when using MechJeb, I’m not playing as a pilot anymore; I’m playing as a captain.

Very few, if any, mods change a player’s role to any significant degree. Because a mod is greatly dependent on the original game’s engine and coding, player roles tend to be fairly static. Counter-Strike and Half-Life might be very different games with different feels, but in the end players have very similar roles in both games: you run, hide, and shoot your enemy before being shot.

When I play games, I like being the hero. I want to sit in the captain’s chair, not the pilot’s. I want to be Armstrong, not Aldrin. I want to be Kirk, not Checkhov. I want to be Ackbar, not the nameless ensign flying Home One. MechJeb allows me to do that. It allows me to plan the entire voyage, relay my orders to my crew, and let them execute said orders. In this sense, playing KSP with MechJeb is quite reminiscent of the old subsim games where players are asked to play the role of a submarine commander (and failing horribly).

Sitting in the captain’s chair is fun. After all, if your entire plan collapses, you’ll be treated to an even more spectacular failure.

Erik Bigras is an independent scholar. He studied as a PhD Candidate in the Department of Science and Technology Studies at Rensselaer Polytechnic Institute. He graduated with a BA in Anthropology (2009) from the University of Prince Edward Island (Canada) where he focused on the creation of subjectivities through digital media. He's been playing video games since the mid-1980s, but expanded his gaming interest to table-top RPGs in the early 2010s.
View all posts by Erik Bigras →
This entry was posted in Criticism, Erik Bigras and tagged Kerbal Space Program, MechJeb, Mods, Role-Playing. Bookmark the permalink.
Loading Comments...
%d bloggers like this: