I return after the holiday season with a confession: I’m not, strictly speaking, a game studies scholar. Rather, I’ve been dabbling and stumbling professionally in this particular academic arena for close to a decade, now. Formally, I’m trained as a classical cultural anthropologists. As such, I have more theoretical affinity with the likes of Franz Boas than I do with Johan Huizinga.

However, fairly early on in my career, I began applying anthropological principles to the study of virtual worlds. One of my first prolonged research projects involved participant observation in a text-based MUD. Afterwards, I migrated slowly towards game studies mostly because, within anthropology, game studies was equated with the study of virtual worlds, a topic in which I had little interest.

From this deviation, my work began taking the shape that it today possesses. My dissertation doesn’t deal with games at all. Rather, I’m interested in the ways in which new data models and practices transform the ways in which scientists understand themselves and the science they do. My main object of analysis isn’t a video game but CMAQ, the EPA’s environmental analysis data model.

However, games seem to continuous creep up into my work. For example, part of my work deals with environmental health and regulation, which led me to become involved in an ongoing research project focusing on asthma. Part of my work on that project was exploring the different ways in which knowledge about asthma was disseminated, which led me to discover a plethora of games used by asthma educators.

It’s this kind of work that led me to discover some very strange games. For the next couple of weeks, I’d like to offer you an epistemological review of said games. By epistemological, I mean that I won’t necessarily be following the traditional formalisms of game reviews. Rather, I’ll be focusing on the ways in which said game intersect and diverge from the established modes of meaning making surrounding particular topics.

This week’s topic will be asthma, and the game, Bronkie the Bronchiasaurus.

Here we see Bronkie (I whimsically refer to him as Yoshie) in a level reminiscent of the Super Mario Bros series.

When we go to see a medical doctor, how many of us would think of asking for a prescription for a video game? My guess: none. However, doing so might not be as strange as it might seem. There exists one game that saw such a limited release that it’s speculated that the only way to acquire it is either through direct mail order or through a doctor’s office. That game? Bronkie the Bronchiasaurus.

Bronkie is an asthma education game. Most of us, I’m sure, are familiar in one way or another with educational games. They can be found just about everywhere on the web, and for good reason: they’re an effective way of providing important information. Bronkie, however,  pre-dates web-based educational games. In fact, Bronkie was an SNES game. Yes, you read that right.

One goal of the game is to collect objects such as lungs or, as seen here, inhalers.

Many of the educational efforts surrounding asthma revolve around the proper use of medicines and inhalers in order to combat asthma. This is because pharmaco-medical discourses dominate the ways in which asthma care and treatment are understood. As such, many educational games aimed at asthmatic persons emulate this model: they are designed in ways that distribute pharmaco-medical information to asthmatic persons through a linear gameplay that excises the possible existence of alternate methods of care and treatment.

By this, I mean that the typical model of asthma education can be characterized by three things. First, it’s medicalized, meaning that asthma is understood as a pathology possessing its own epidemiology and etiology. Second, it’s technologized, meaning that most solutions will involve the acquisition and utilization of some form of technology. Third, it’s aimed almost exclusively at asthmatic people, and focuses on personal responsibility.

To progress through the game, players must, at various points throughout the levels, correctly answer asthma-related questions.

On the surface, Bronkie the Bronchiasaurus corresponds to this broad characterization of asthma education games. Bronkie was designed by Raya Systems – now renamed Health Hero Network, a subsidiary of the Robert Bosch Foundation – whose “products are endorsed by the American Academy of Pediatrics, Juvenile Diabetes Foundation, and Asthma and Allergy Foundation of America,” and that brought us other educational SNES games such as Captain Novolin and Rex Ronan: Experimental Surgeon.

The game offers a linear form of play typical of the platformer game design. In Bronkie, players take control of Bronkie, an asthmatic dinosaur who must manage his asthma as he attempts to repair the Wind Machine in order to save the city of San Saurian from the evil clutches of Mr. Rexo.

Throughout the game, the player must guide Bronkie through a series of levels filled with enemies as well as asthma triggers such as chemical drips and dust clouds while simultaneously collecting peak flow meters and inhalers. In this, Bronkie the Bronchiasaurus‘ content is fairly typical when compared to other asthma education games. 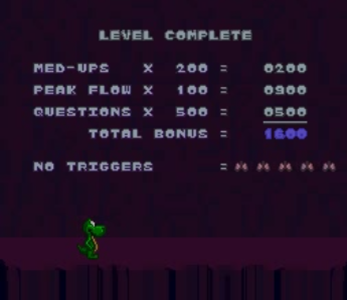 Bronkie’s scoring mechanism is a perfect representation of the three characteristics of traditional asthma education that I previously mentioned.

However, Bronkie differs from other game-based educational efforts by it’s premise: the reason why the Wind Machine must be repaired is because the entire city of San Saurian is covered by an all-encompassing dust cloud. As such, Bronkie the Bronchiasaurus is one of the rare games that introduces environmental concerns into asthma education.

Bronkie‘s original premise is that the Wind Machine dissipating the dust cloud covering the city of San Saurian must be repaired in order to bring the environment back to a state in which the city’s inhabitants can live healthy lives. Here, Bronkie ultimately attributes causation of asthma to the environment. Despite the prevalent presence of pharmaco-medical models of asthma throughout the game, this environmental premise focuses the player’s attention on the environment. Playing Bronkie the Bronchiasaurus teaches players that, while medicines can control asthmatic attacks, only environmental interventions can prevent them entirely.

However, Bronkie does ultimately fall back into the techno-medical tropes promotes by popular discourses of asthma care. The savior of San Saurian is not, in fact, Bronkie himself. In effect, the dust cloud surrounding the city is not kept at bay through the transformation of societal practices involving the environment. Rather, the Wind Machine, a large cubic contraption, represents the technological power under which San Saurian’s citizens must live. Bronkie the Bronchiasaurus’ final lesson is that your way of life does not need to be transformed if you have asthma because technology can save you.

Before going further, I need to clarify something: I’m not against the dominant model of asthma education, nor against the dominant discourse surrounding asthma pathology and etiology. I’m not advocating that people living with asthma should throw away their inhalers. I’m a firm practitioner of Donna Haraway’s (1988) statement that in order to critique something, one has to be deeply embedded and in love with it. As such, I’m advocating transformation as opposed to rejection. As George Marcus and Michael Fischer (1986) have said, true critique always offers an alternative.

As such, my love for Bronkie the Bronchiasaurus and the unfulfilled possibilities found in the game’s discourse has led me to search for alternative modes of asthma education. One such model that I’ve talked about elsewhere involved rethinking the three main tenets of asthma education – medicalization, technologization, and personal responsibility – in order to expand the realm of possibilities when it comes to figuring out what asthma is all about.

Rather than a medical problem, asthma can be understood as an environmental one. Does this mean that pathology and etiology are thrown out the window? No. Rather, it means that new collaborative research possibilities can be forged that would allow us to better understand asthma.

Rather than a technologized conditon, asthma can be understood as an affect creating one. Does this mean that the inhaler should be discarded? No. Rather, it means that we need to understand the inhaler as something that helps regiment the everyday life of people with asthma, as oppose to its current characterization as a technology that becomes invisible after its use.

Rather than personal responsibility, asthma can be understood as belonging to the realm of communal responsibility. Does this mean that people with asthma shouldn’t be responsible for their own treatments? No. Rather, it means that we need to become aware that everyone’s actions will impact the regulation of asthma.

Erik Bigras is an independent scholar. He studied as a PhD Candidate in the Department of Science and Technology Studies at Rensselaer Polytechnic Institute. He graduated with a BA in Anthropology (2009) from the University of Prince Edward Island (Canada) where he focused on the creation of subjectivities through digital media. He's been playing video games since the mid-1980s, but expanded his gaming interest to table-top RPGs in the early 2010s.
View all posts by Erik Bigras →
This entry was posted in Erik Bigras, Reviews and tagged Alternative model, Anthropology as Cultural Critique, Asthma, Bronkie the Bronchiasaurus, Dominant model, Donna Haraway, Educational games, Etiology, George Marcus, Michael Fischer, Pathology, Pharmaceutical model, Situated knowledges, Video games. Bookmark the permalink.